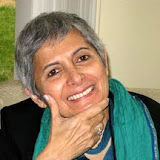 Mehrangiz Kar is a lawyer, journalist, writer and social activist in the area of human rights, women’s rights, and political development with a focus on the development of civil society in Iran. She has published 20 books and dozens of article in Iran and abroad. She has been living in exile since 2002 following a period of incarceration in Iran. Mehrangiz Kar has collaborated with numerous human rights and research organizations. These include, in U.S., the Nonviolent Initiative for Democracy (NID), Harvard University and Columbia University, and the Brookings Institute; in South Africa, Cape Town University; and in Japan, Toda Institute. Kar’s several international awards include the Prix Ludovic Trarieux 2002 granted by the Human Rights Institute of the Bar of Bordeaux and the European Lawyers Union.. Kar is a member of PEN in the U.S. and Canada as was her late husband, Siamak Pourzand, and continues to be recognized by the New York-based organization, Scholars At Risk.